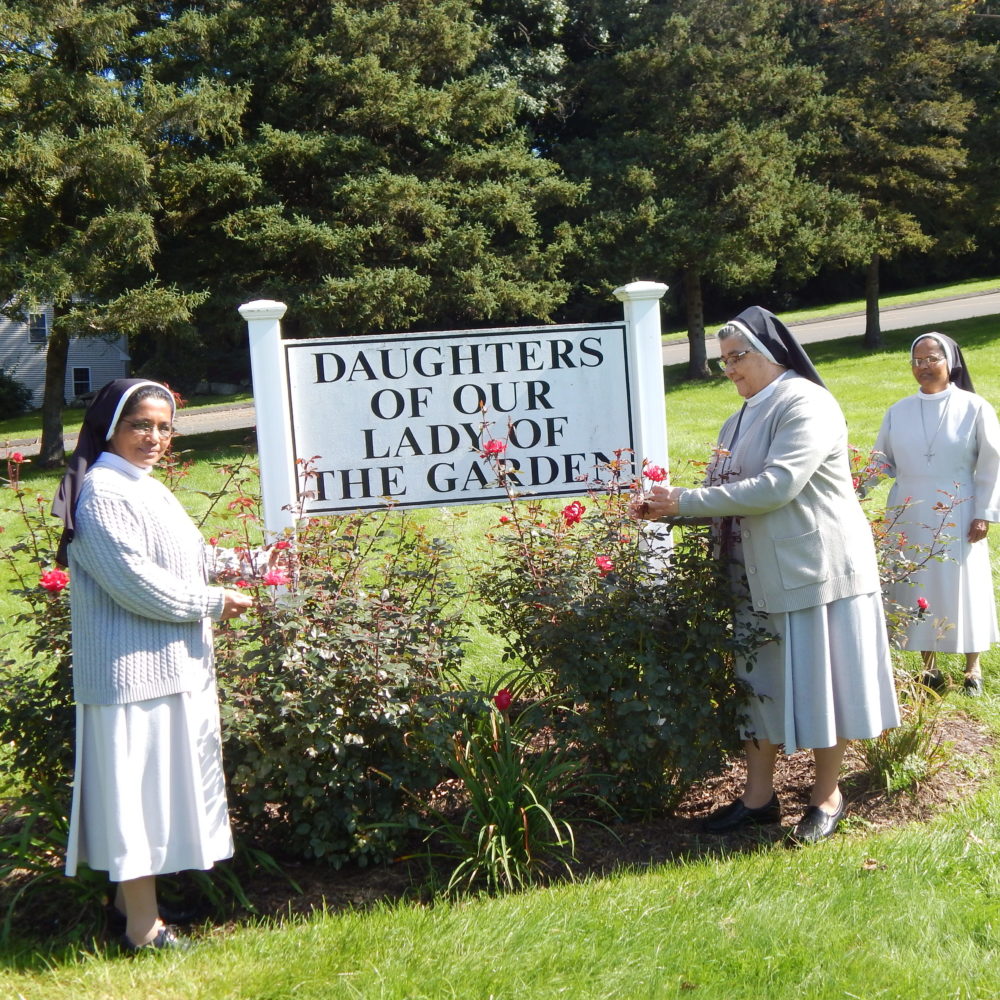 FMH is an acronym that stands for “Figlie Mariae Hortus,” Latin for “Daughters of Our Lady of the Garden.”

When our Founder, St. Anthony Gianelli, met with the first group of Sisters, thinking about giving them a title, he called them “Daughters of Mary,” and in reference to those who were to remain in Chiavari, he added the words “of Our Lady of the Garden” as an act of homage to the miraculous image venerated in the shrine of the same name in Chiavari.

Attentive to the needs of the times, in creative fidelity to the founding Charism of vigilant evangelical charity, we do our best for the good of all persons, with a special love for the poor. Our service of charity within the Church is expressed in self-giving and selflessness. In sisterly communion, we joyfully take up the challenge of becoming everything to everyone, with a commitment, which knows no limit other than the impossible or the inopportune. (C. 2) 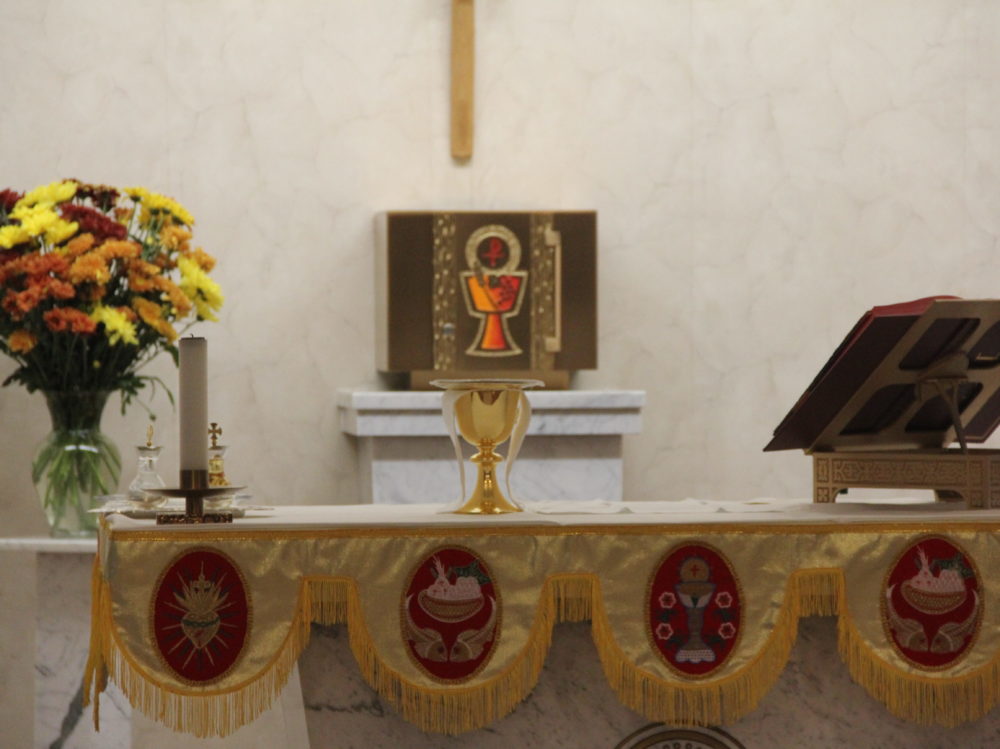 Jesus Christ is at the center of our life. From contemplation of Christ the Good Shepherd, who passed through the world doing good, comes our desire to love and serve, our commitment to self-sacrifice for the safety and health of others. 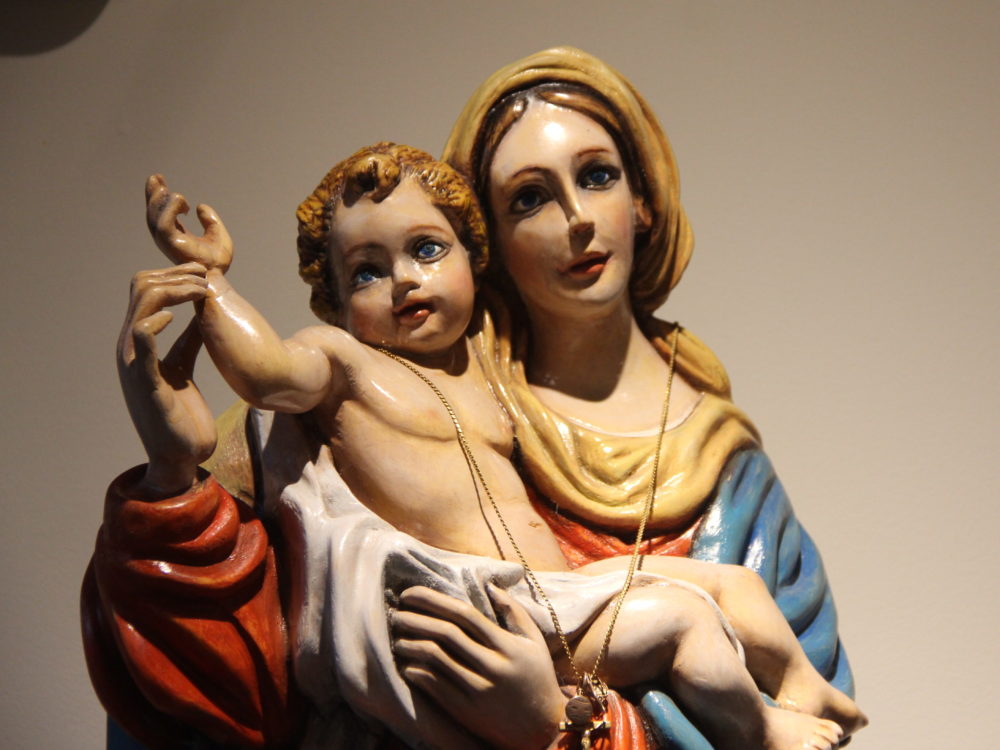 The Charismatic force of the Institute is illuminated by the place occupied by Mary in our life. Our Lady of the Garden is our Mother, model and mediatrix C.3). In our Founder’s words, “Mary is a copy of God’s love; she is the real image of divine goodness. She wants to help without majestic grandeur and awesome justice… We find in Mary an example never to be lost from sight, we turn to her as her true daughters, and hope for everything from God by her intercession.” 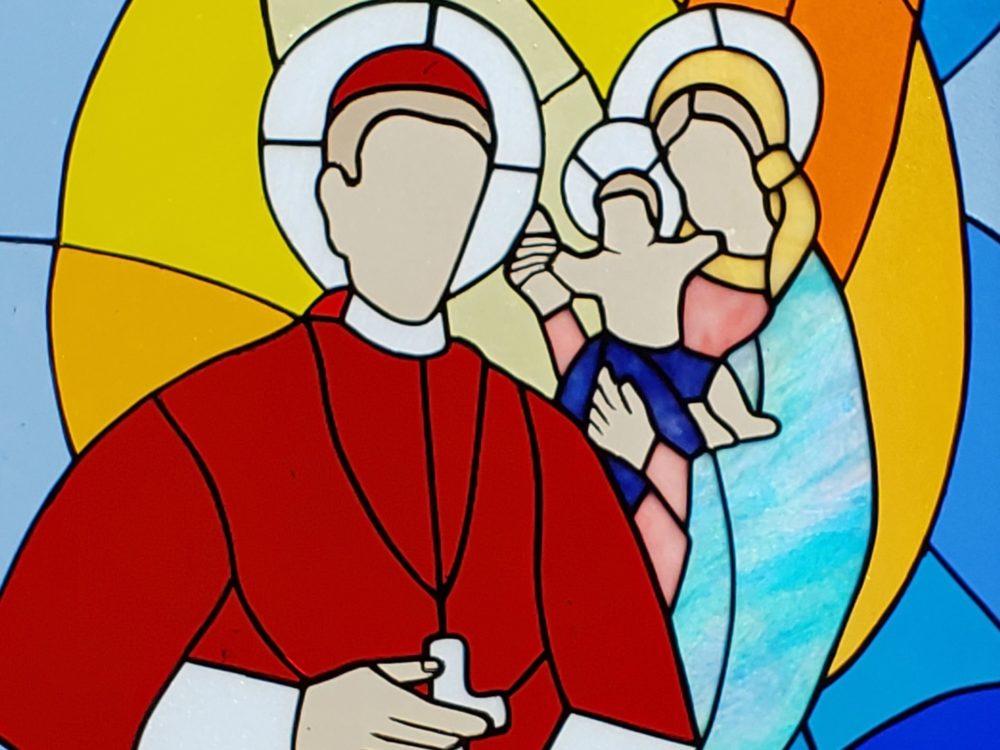 Following in the footsteps of St. Anthony Gianelli, a man of courageous faith, a tireless missionary, a vigilant shepherd, we strive to make charity our life plan and way of life. Open to the constant demands of the Spirit of God and aware that  that we must never stop doing good until death, we venture beyond every boundary for the love of Christ, for serving our needy brothers and sisters, afflicted by old and new forms of poverty. We seek to plan and carry out new projects of evangelization and human promotion to offer a suitable response to current situations (C.64).

Following the example of the first Christian community, who tirelessly listened to the Word and generously put all their possessions in common so that all would have what they needed, we strive to make of our own communities a house and school of communion.

Strengthened by the teaching of our Founder, we cultivate a genuine sense of belonging to our religious family. Sisterly life is enriched by the acceptance of diversity as challenge and grace, because it is the Lord who chooses and calls us to live together. Therefore, we cherish the enthusiasm and creativity, which the Lord can give to the young sisters, the wisdom and witness of fidelity of the sisters who are advanced in age, and encounter and communion among different cultures. 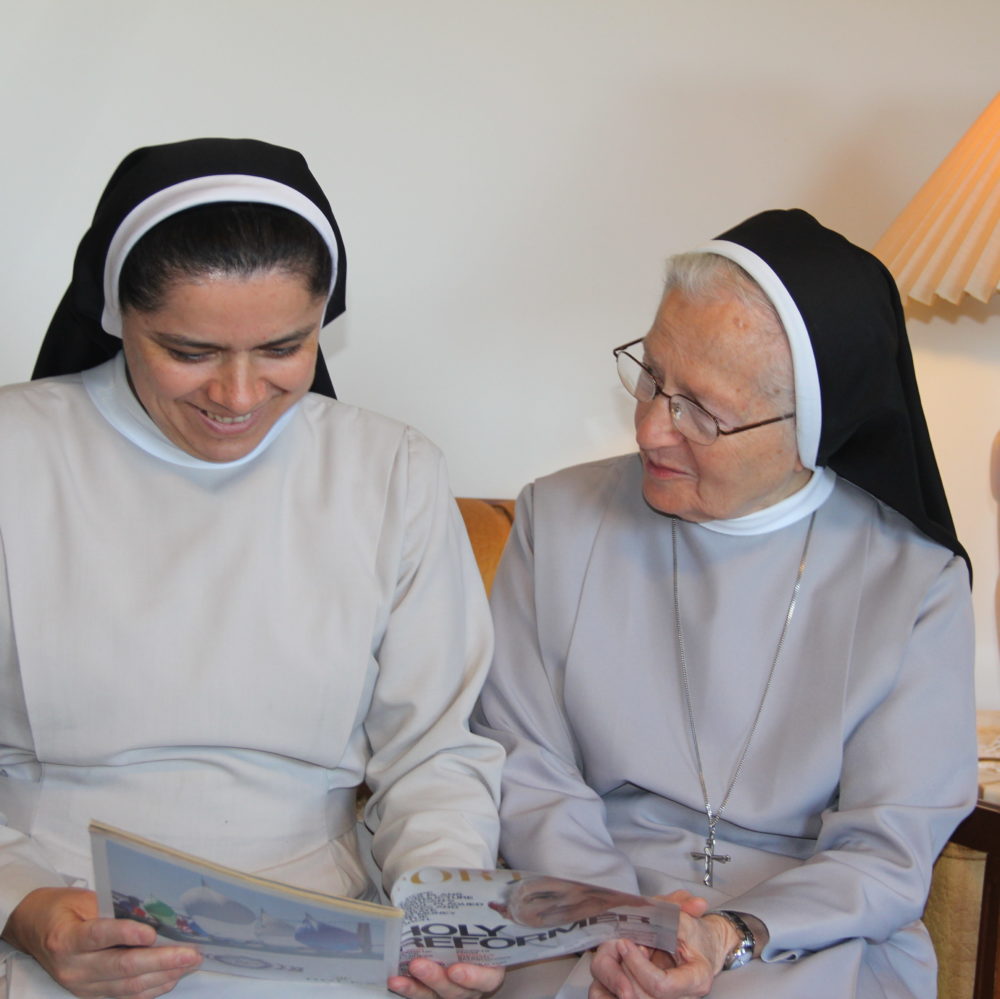 We live our charism in fraternal communion, helping each other to live a simple lifestyle. Because of poverty, the distinctive characteristic of our Institute, we assume a sober, basic, and austere lifestyle, which makes us obedient, free, available and willing to go where others cannot go.  Our personal and shared experience of God’s love and fidelity helps us to live united among ourselves, joyous in spirit, happy in appearance, modest and delicate in our relationships, benevolent to all, attached to the poor, vigilant and tireless in charity and service. 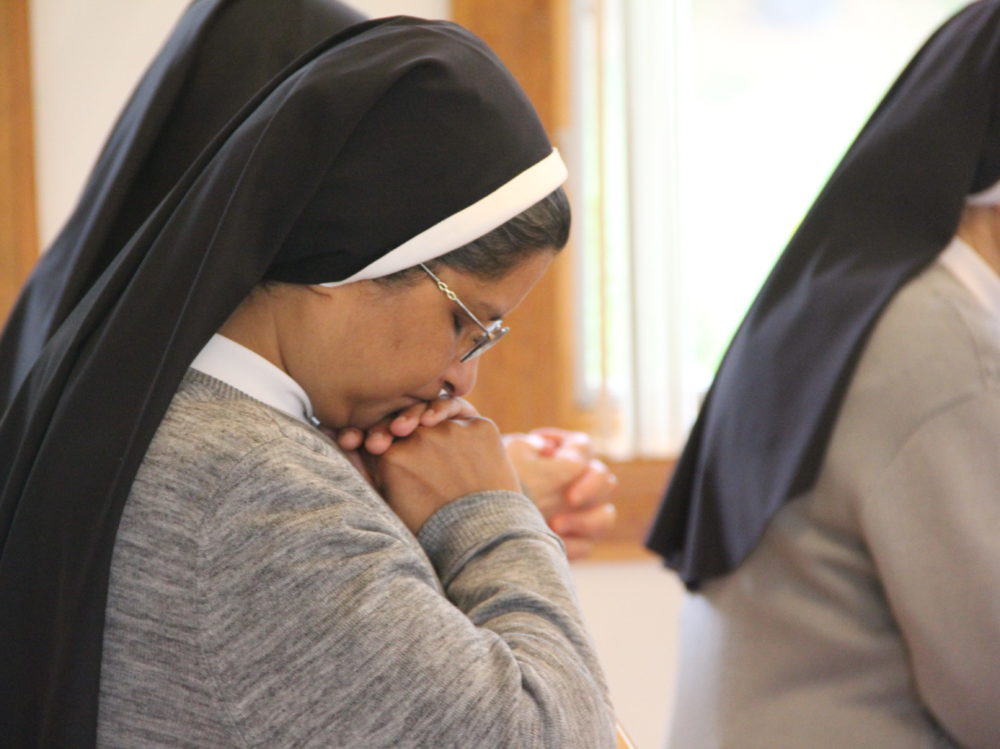 We are committed to making our daily life a school of holiness, a privileged place of encounter, of receptivity, of purification, of growth in love and in communion; prayer is an essential ingredient to achieve this goal. 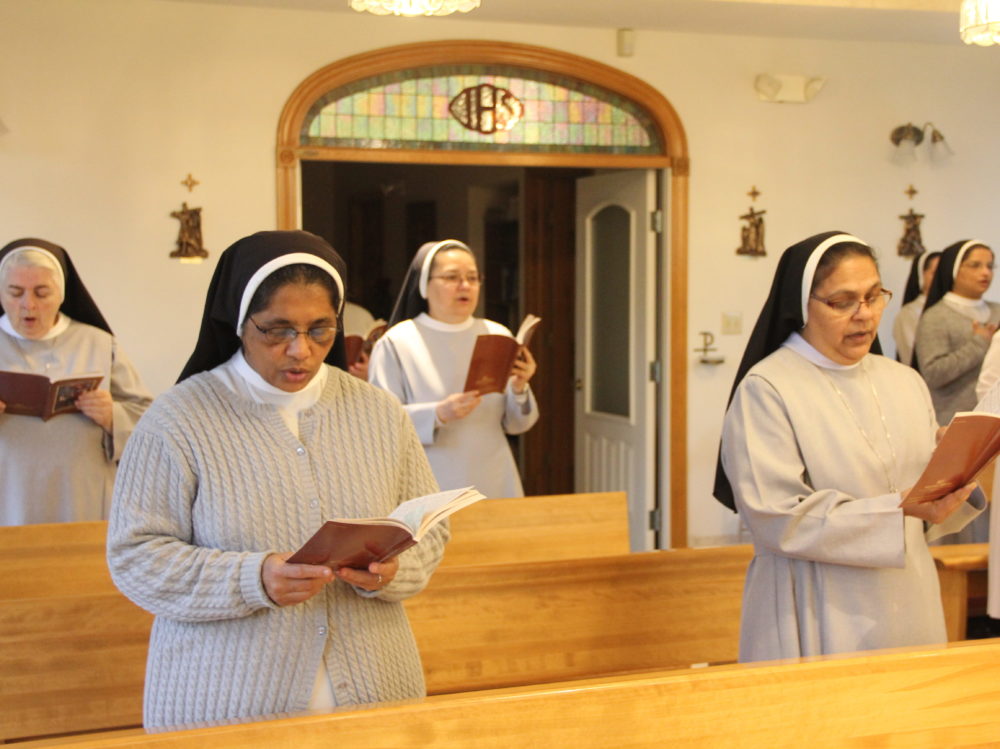 Community prayer is one of the most meaningful expressions of fraternal communion. It is a dynamic and transforming reality that enlightens the hours of our day with diverse intensity. Our daily basic prayer encompasses: a morning offering to God upon waking, the Angelus, Lauds, the celebration of the Eucharist, Marian prayers -including the rosary, the celebration of Vespers, and Compline. 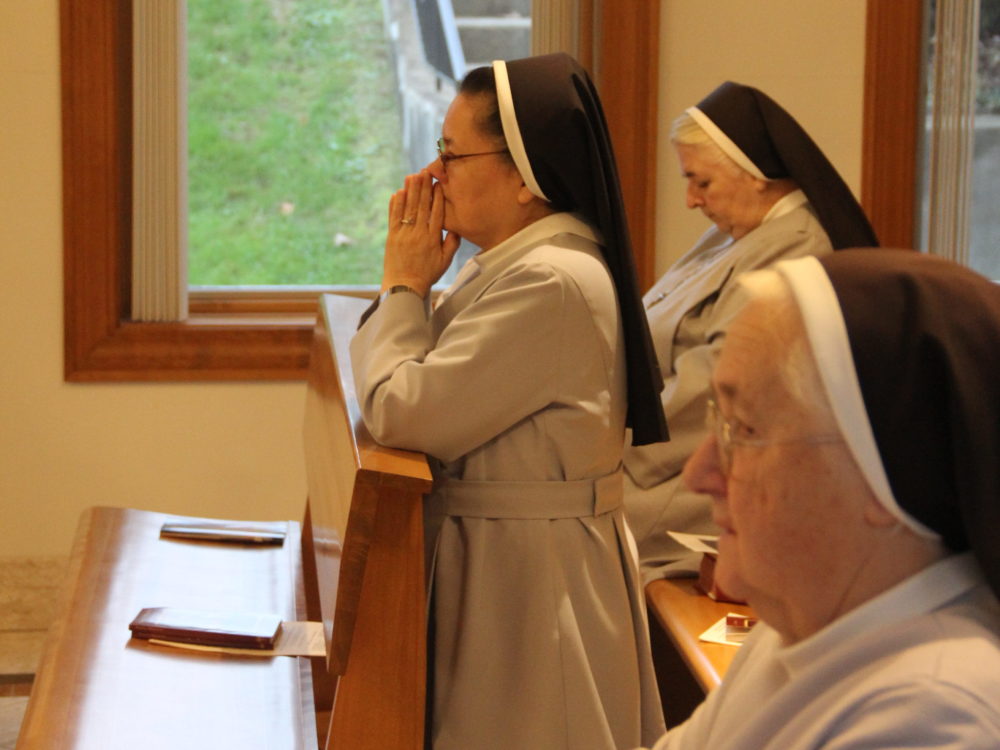 We are faithful to one hour of personal prayer, preferably in front of the Blessed Sacrament, taking care of its quality and length. We accustom ourselves to frequent visits to the Blessed Sacrament. A daily Eucharistic adoration in community, is encouraged in the communities where the schedule makes it possible. 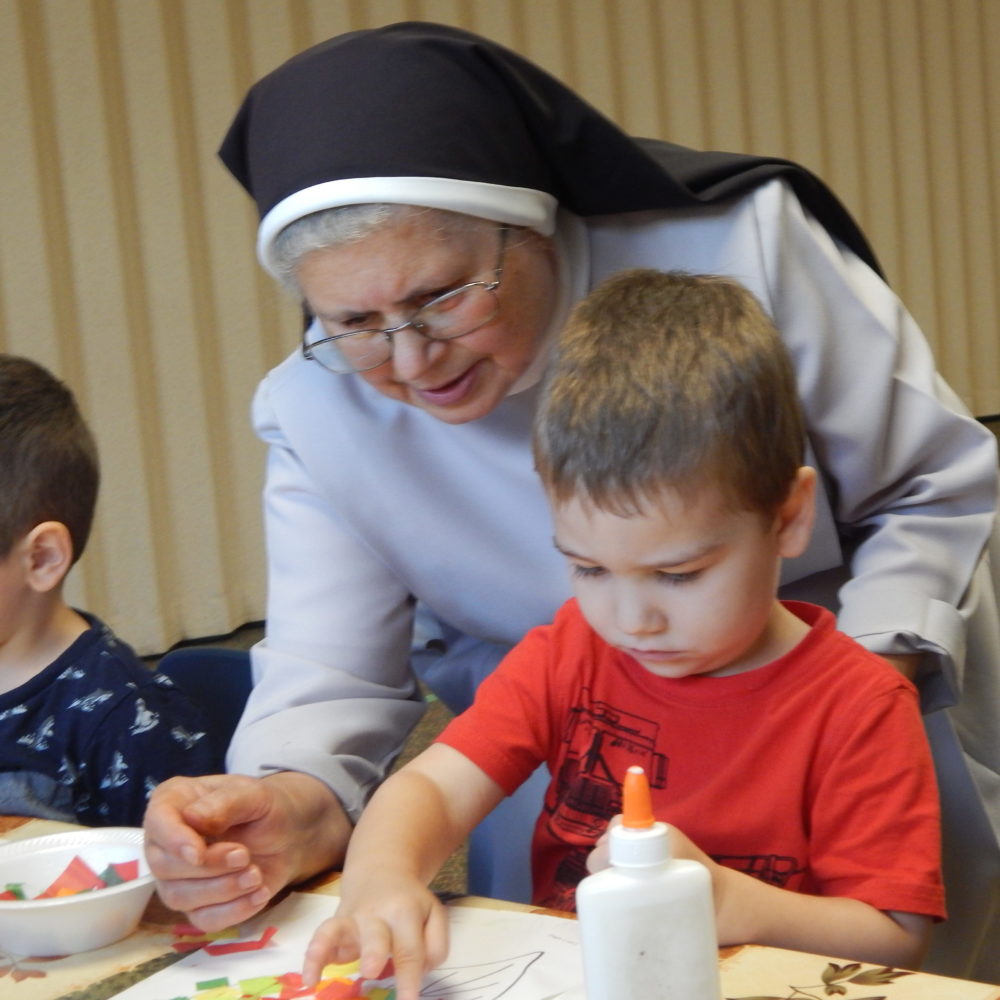 The Institute of the Daughters of Our Lady of the Garden is a Religious Congregation dedicated to apostolic activity.  We follow Christ very closely, give ourselves totally to God, loving Him above all things, dedicating ourselves to His glory and taking part in the saving activity of the Church.

Our apostolic mission is born of our Father’s initiative of salvation and of the mission of Christ, which continues in the Church. Under the impulse of the Holy Spirit and faithful to its origins, this mission expresses itself in response to the material and spiritual needs of men and women.  Sensitive to the directives of the Church and to the state of the human society, we reach out to meet the needs of all and especially of the most deprived and poor.

In scope of activities the apostolic action of our Institute is universal: hospitals, schools, social services, pastoral work in parishes, youth and adult ministries, nursing homes, and missions. 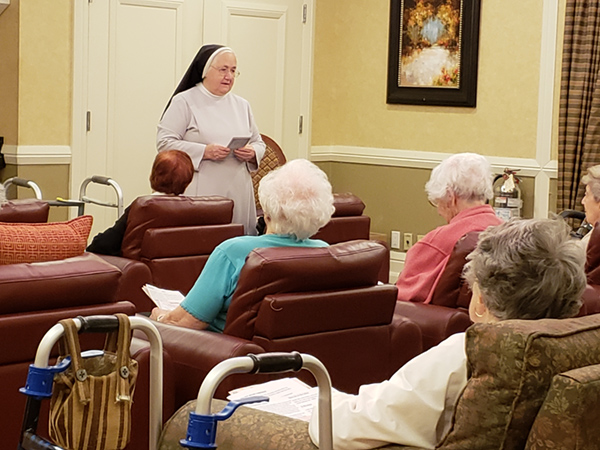 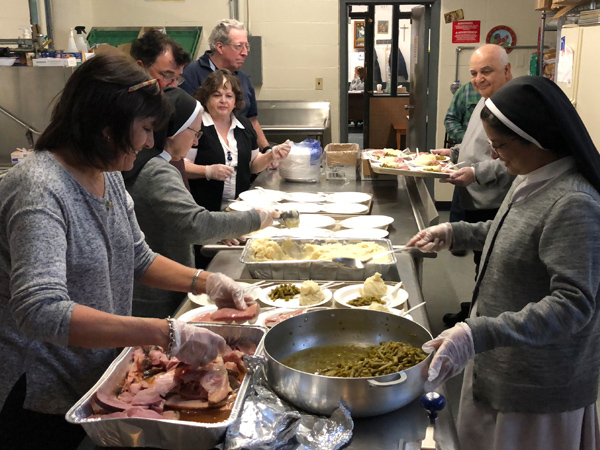 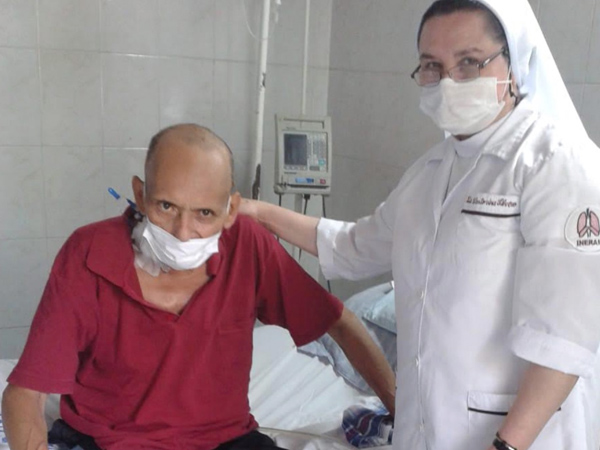 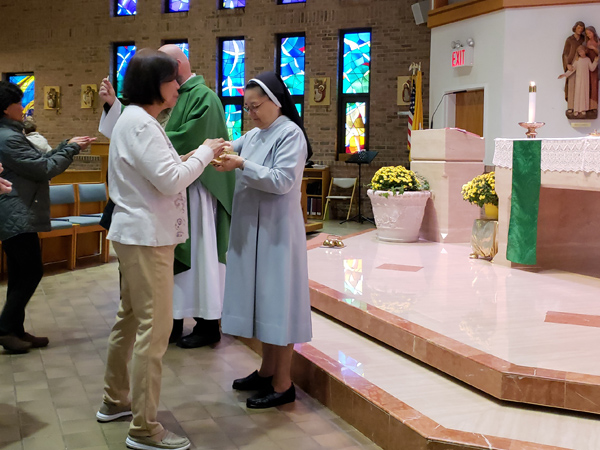 The Institute of the Daughters of Our Lady of the Garden was born from the passionate love St. Anthony Gianelli had for the children of his parish.  It was Gianelli’s charity wide-awake and open to all that moved him to start a new Congregation.

On the evening of January 12, 1829, thirteen young ladies, whom Gianelli had come to know and to advice, gathered together in Chiavari, Italy.  They were of various ages and social conditions, but all were animated with the same spirit and were ready to stay together united in perfect community life.

As soon as they came into existence, the Sisters began to help their neighbors.  They took care of a hospice for orphan girls. Under the impulse of the Holy Spirit, in a few years their service extended to the whole Liguria region, in Northern Italy, taking also other forms of charity such as the care of the sick and the poor.  They opened a school and started visiting the hospitals in the area; this care for the sick resulted in the Sisters’ call to direct the hospital and to administer the orphanage.  Some years later, God called upon them to serve in La Spezia’s hospital.  Here they persuaded the hospital commission to open a school of Charity for abandoned girls.  In addition, they founded a center of education for girls of distinguished families in the same city of La Spezia.  In 1836 they voluntarily offered themselves to assist the victims of cholera.

In 1836, the Founder, St. Anthony Gianelli, revised the General Rules, known as the Fifteen Articles, in which he defined the scope and the identity of the Congregation.

In 1842 the Institute had its first Superior General, Mother Caterina Podesta.  During this time the Congregation spread throughout Ventimiglia, Piacenza, and other cities of Northern Italy.  By 1853 the Diocesan Church recognized and officially received the Institute by approving its Constitutions.

General Superior, Mother Caterina Podesta, moved to Rome in 1864 and established the Generalate House of the Daughters of Our Lady of the Garden.  Having grown sufficiently and having proven its overall stability, the Institute obtained Pontifical approval in 1868 from Pope Pius IX, who personally visited the Sisters’ Mother House.

As more people became acquainted with the charitable, social, and academic works of the Congregation, more young women were attracted to join them.  The Gianellian spirit of going where the need is the greatest led the Sisters to open houses not only in Italy but also in other countries.

In 1856 eight Sisters embarked at Genoa to go to Uruguay as missionaries, and from this country to Argentina, in 1859.  In both places the Sisters took care of the sick in hospitals, and assisted the poor, the elderly, the chronically ill, the mentally afflicted, and the abandoned infants.  At the same time they offered excellent education to the children and the youth by founding about 30 schools in few years.

Times have changed, but apostolic needs, to date, have remained basically the same since 1829.  The spirit of St. Anthony Gianelli, a man of vision, lives on in the apostolate and the ideals of his daughters who daily invoke his assistance.  Gianelli’s apostolic spirit helps them to work together for the greater glory of God and the salvation of people in a generous attitude of love and poverty.

Since the foundation of their Institute, the Sisters have dedicated their efforts to serving in nursery schools, elementary and secondary schools, colleges, training schools, hospitals, social services, mission places, nursing homes, vocational centers, and parishes.  Thus, in addition to the communities in Italy, the Daughters of Our Lady of the Garden’s mission has expanded throughout the world. At the present they also serve in Uruguay, Argentina, Palestine, Brazil, Spain, the U.S.A., Paraguay, Chile, India, the Democratic Republic of Congo, Bolivia, and Papua New Guinea.